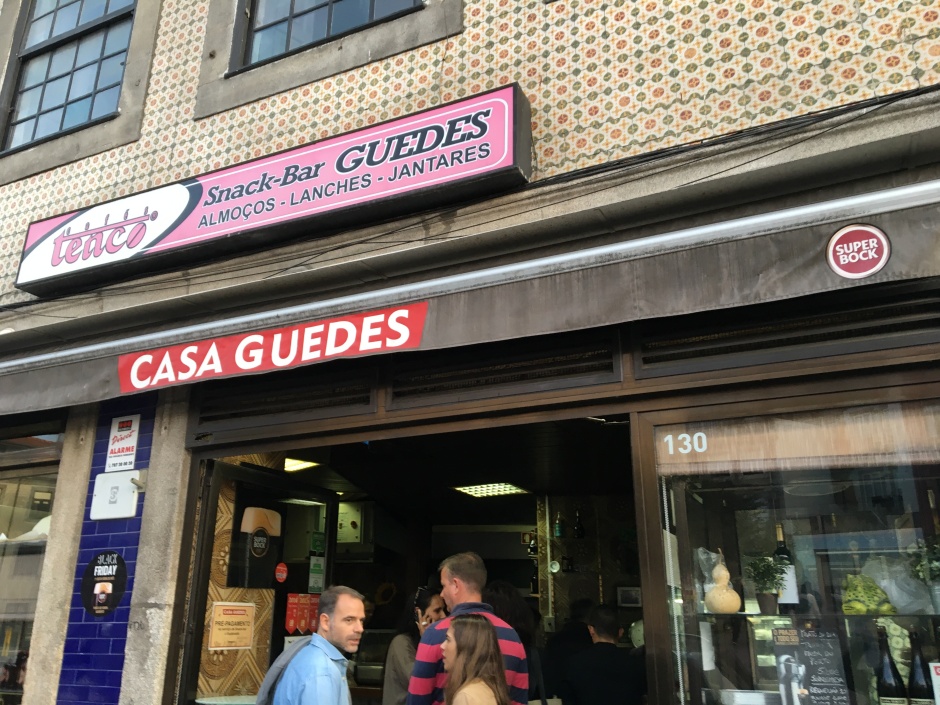 With apologies to my Jewish and Muslim friends, I did not make this rule:  the name of the game in Porto is Pork-o.  Like, for real.  While true for most of the Iberian peninsula, this little rule seems to be magnified in Portugal’s second city . . . much to the disappointment of my travel companion who was excited to break his Yom Kippur fast 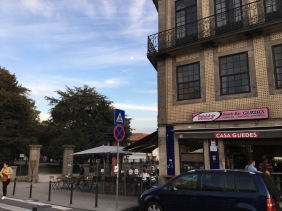 soon after landing.  Our gracious AirBNB host gave us more great recommendations than we were ever able to hit, but his stories so frequently included roast pork and the local favorite francesinha sandwich (think Portuguese Hot Brown with ham, sausage, roast beef, coated in a cheese and tomato sauce) that we had to do a bit of our own searching.  Casa Guedes, however, had enough options on offer that we made it work.

This little family run spot sits at the corner of the pleasant park Jardim de São Lázaro.  As with most of Porto, the locals that have been going there for years seem fascinated by the trickle of foreigners that seem to be coming in ever growing waves.  (Yes, that’s a mixed metaphor.)  Still, it’s a mostly locals spot and the counter service staff gets a kick out of foreigners who can actually manage to order in proper Portuguese.  While the bolinhos de bacalhau (classic Portuguese codfish balls) and fresh country

cheese are worthy companions to the Super Bock on tap, the real star of the show here is the pernil sande – slow roasted pork sandwich.  I chose the version with fresh cheese and it was to die for.  I say this, mind you, with many years of consuming Cuban lechón straight off the Caja China and 12-hour Kentucky-smoked pork under my belt.  But beware:  you will most likely end up getting two or more and having your friends roll you out of here in a wheelbarrow.  If you’re lucky enough to visit on a warm day, have an espresso or two on the terrace to recover.  Bom apetito! 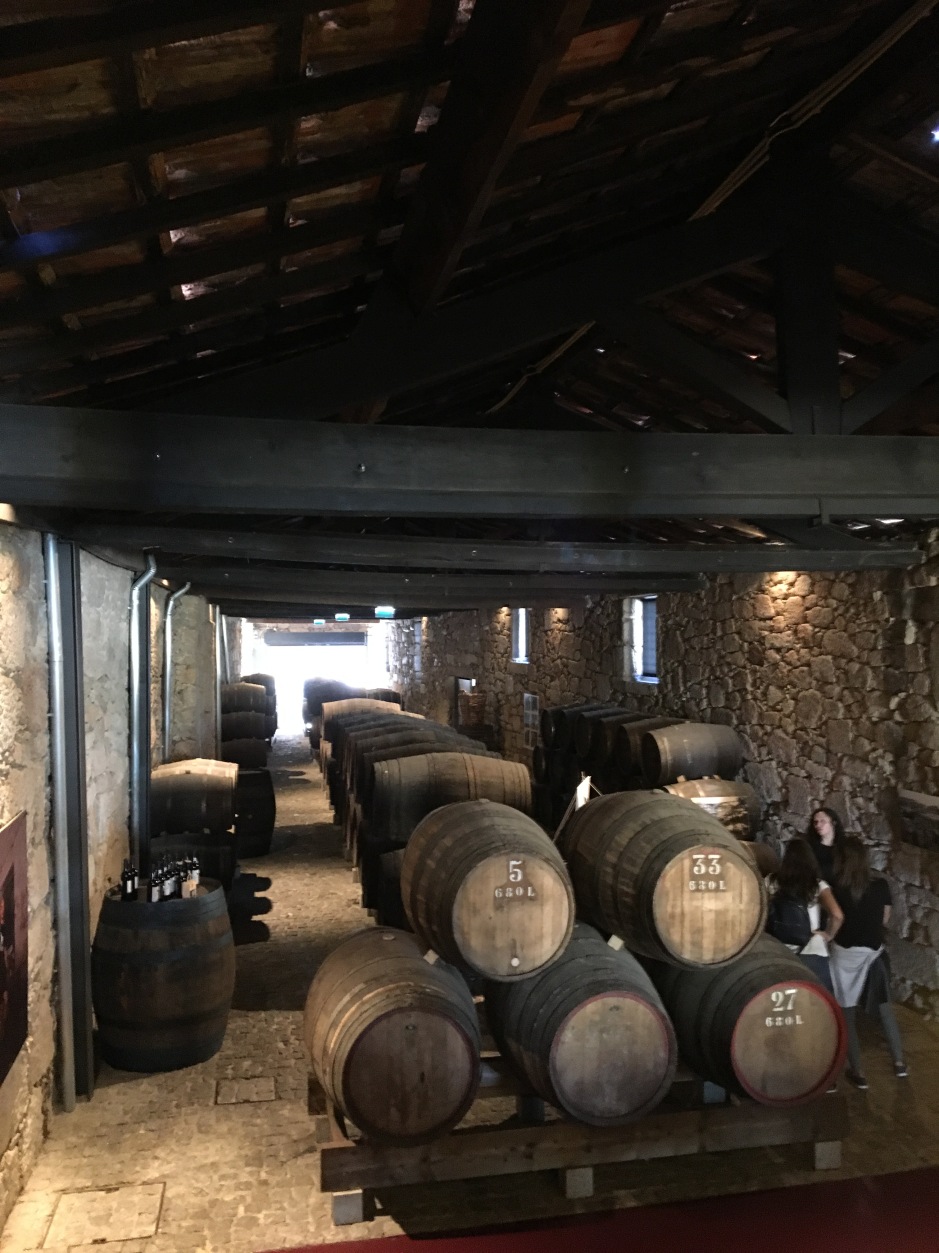 We lucked into this place entirely.  Wine tours in Porto’s Gaia wine house district don’t tend to start until 11ish, but we don’t often let silly formalities like operating hours slow us down.  With all the big, famous name Port wineries still shuttered we stumbled into this place by chance – and an open door. 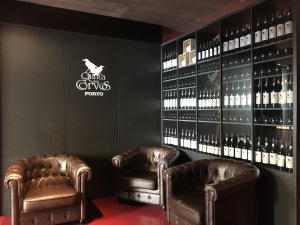 Admittedly, the early arrival got us invited to, oddly, “relax” in the restroom while folks pulled themselves together.  An older German couple straight out of central casting joined us (i.e. rude, cranky, weird older man in ill-fitting and awkward neo-90’s techno tank top and shorts accompanied by very kind, cordial wife with spiky red hair).  Our tour guide, Isabel Santos, took just a few minutes to shake off last night’s partying cob-webs before launching into a well-rehearsed (but not tired) introduction to the history of the family wine house.  A beneficiary of one of the world’s oldest zoning charters – 1756 by Portugal’s beloved Marques de Pombal – the property in Sabrosa along the Pinhão river produces an average of 40,000 bottles a year.  The Quinta was acquired by the Queiroz Cardoso family in 1989 and has since remained in the family (with a few small enlargements) and is planted in an 80/20 red to white ratio, with the exact makeup of the varietals – like with the wines – something of a secret.

Isabel never missed a chance to needle some of the nearby “multi-national” wine houses for not being Portuguese enough, or abandoning old world artisanal methods for mechanized and sterile (perhaps too) modern methods.  A particularly excellent feature of the tour was her willingness to dive down as deeply as their secret recipes would allow into winemaking and grape-growing minutiae, on request.  I tried to not make the tour laborious for my companions, but did take the chance to ask a few advanced questions – questions which Isabel was able to answer concisely. 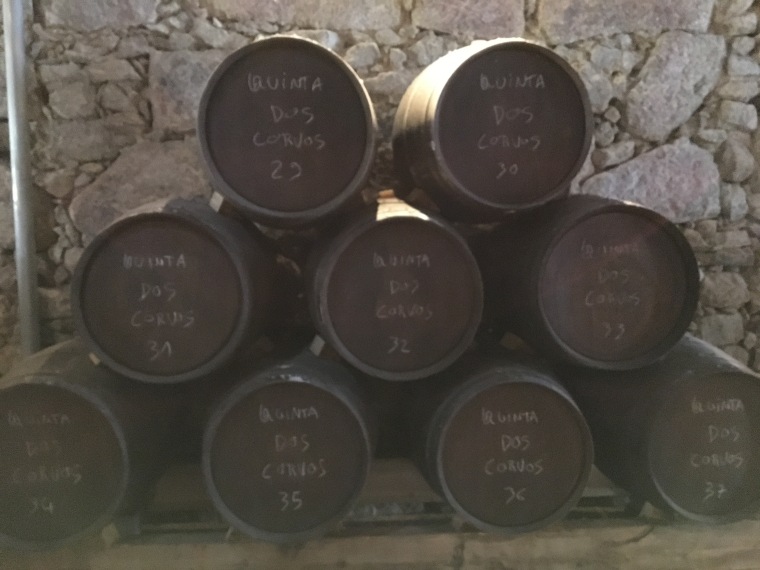 The tasting room at this wine house is stellar.  One could make an afternoon of it by ordering food and other goodies.  Some light snacks and a generous introductory tasting were included with the tour.  Again, Isabel knocked this out of the park, appropriately generous and thorough with both pourings and knowledge.  Unlike many other wine houses, Corvos offers up tastings of anything they make, if for a very reasonable price on several of the older, more advanced offerings.  My comment on the likely malvasia content of the white ports (airy salinity that balances out the usual cloying sweetness of white port) won a knowing squint from Isabel, before simply commenting that she couldn’t really comment.  I opted to go deep into some of the Vintages, as well as the 20 year old white port.  Ultimately, I walked with a bottle of 1996 Vintage (the year I first visited Lisbon), a bottle of the 20 year white, and a bottle of their cosecha.  If you only have time for one wine house tour while in Porto, make this the one . . . and don’t miss it if you’re piling up visits.  Oh, and in case it isn’t already obvious, ask for Isabel.