If you’ve ever imagined yourself sitting in a sprawling French café next to the likes of Picasso, Hemingway, and Edith Piaf in a scene torn from the pages of A Moveable Feast, this is your spot.  Originally opened in 1836 by Alsatian transplant Georges Holfherr, this

grande dame sits alongside Lyon’s old train station Perrache and features exquisite décor from the last two centuries.  I found it because it’s a mere five minute stroll from the law faculty of the Catholic University of Lyon, where I teach as a guest professor in an executive course once a year.  It’s a gorgeous space with substantial history, not all of which is readily discussed in polite company.

Unfortunately, I’ve only ever visited for one of the expansive lunches that the French are so well known for.  The daily menu is exquisite and changes regularly.  As to be expected, service is achieved with the crisp efficiency of a thoroughly professional staff who whisk away plates and crumbs, sliding into place the next course with the 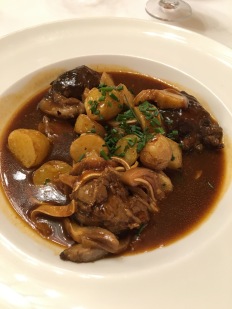 elegance of a well conducted orchestra.  The food – all courses – are tip-top brasserie fare, with less reliance on the typical local delicacies of organ meat and offal that one encounters in the city’s legendary bouchons.  That is, typically French, but not specifically Lyonnaise.  Regardless, you can’t go wrong by following the chef’s daily suggestions in this bustling open space – perhaps the largest restaurant of its kind in Europe.

Now to the bit of history that Georges doesn’t advertise, with the caveat that this is all still under investigation.  I was first told about this by a local who may or may not have been correct in pointing it out.  With that disclaimer, one cannot help but notice the flooring tiles featuring one of the twentieth century’s most recognizable symbols:  the swastika.  As it was related to me, during the World War II the Germans first took the southern portion of Lyon, with the northern portion continuing to fight on for some time before falling.  During that time, 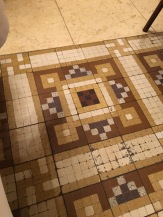 the German army favored Georges, using it as a beer house and social center.  As with some parts of Europe, some evidence of the occupation survived the death of the “Butcher of Lyon.”  Hence, what you might notice today if you have the misfortune, as I did, of dropping your salad fork.

Consider this a lovely, reliable spot to haul a group for a delicious and lively meal with an exuberant atmosphere – Lyon’s true specialty.